Post-emancipation, African Americans in the United States gained access to more opportunities and utilized their skill sets to create their own spaces in a generally unaccommodating society. In Leesburg, we can see the physical manifestations of these efforts in churches, schools, fraternal lodges, community centers, and businesses, many of which still stand today.

Economic security, through entrepreneurship and business management, was seen as a critical step towards empowerment as well as a way to support the local black community. While Leesburg had a high degree of residential integration, discrimination and segregation in schools, public facilities, and businesses created barriers for success. Despite this, multiple black-owned businesses not only existed but thrived in Leesburg.

Image: Currently the home of the Loudoun Museum, the Do Drop Inn was located on the corner of Wirt and Loudoun St.

Originally opened by Hamilton and Hattie Fink in the mid-1920’s, the Do Drop Inn was a social spot and restaurant that catered to a black clientele. It’s most well-known owners were Sherman and Mary Berry who began their management in 1933. Most restaurants in Leesburg at the time would not let black patrons sit inside the dining room. Some had tables in the kitchen or out back, and others restricted them to order take-out only, but not the Do Drop Inn. The Berry’s establishment was so popular, it was known to have a crowd waiting outside to get in on the weekends. Not only were black patrons permitted to sit inside, they could dance to music played on the nickel jukebox- as long as the modest Mrs. Berry was away at a church meeting.

Despite the success of the Do Drop Inn, its prime location and demographics made it a target. In 1939, white locals and officials wanted a modern grocery in town and 16 Loudoun St. was the proposed site. The Berry’s were unable to renew their lease, and they moved the restaurant to 5 Royal St. SE, possibly renaming it the Ideal Restaurant.

It is not until 1970 that all restaurants in Loudoun are fully integrated.

Establishments like the Do Drop Inn were not incredibly common. In the late 19th and early 20th centuries, there were a limited number of occupations that society deemed appropriate for their black neighbors, especially in smaller towns. Historian John Ingham’s study showed that “In southern cities that did not develop vital African American neighborhoods… black Americans continued to pursue traditional enterprises such as barbershops and tailor shops, which were often oriented toward serving white customers.” In a residentially integrated town like Leesburg, one of the most successful businesses was in fact, a barbershop.

4 Loudoun St. SW (current location since 1962. Previous locations were near the courthouse on Market Street) 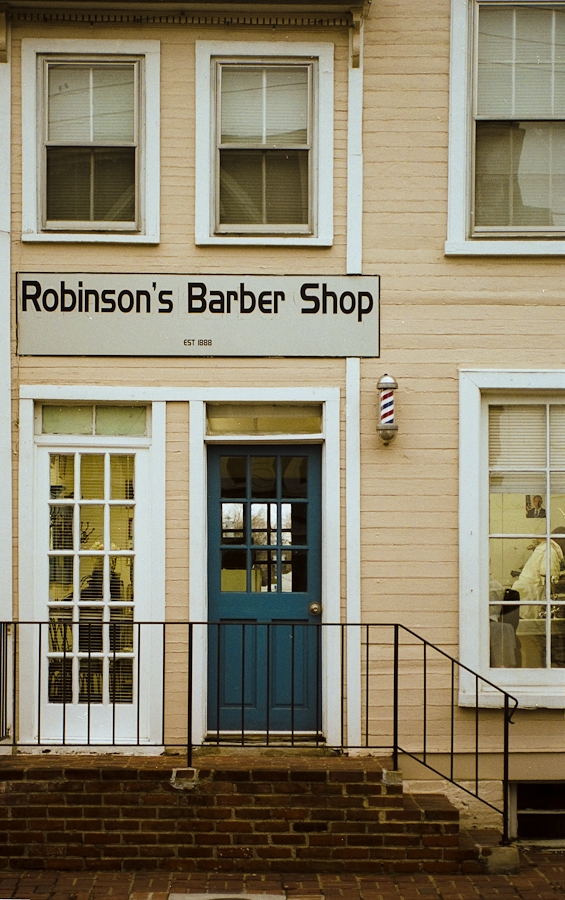 Robinson’s Barber Shop was established by Thomas Robinson, an entrepreneur who moved his business from Baltimore to Leesburg in 1888, making it the county’s oldest operating black business. Thomas’s son Verdie Robinson takes over the business in 1919, and like his father, opts to only serve white clients in his shop. He did serve black clients, but did this after hours in their homes. This was common at the time as segregated society would have required shop owners to choose a clientele and in many cases, as in Leesburg, the white population comprises an affluent majority. Interestingly, barbering was one of the few realms in which black businessmen could, and did, outperform their white counterparts.

The decision to cater to this clientele was controversial but profitable. His success allowed him to become an advocate in his community that might not have been achievable for someone without a close relationship with both the white and black community. When NAACP litigator Charles Hamilton Houston came to Leesburg in 1933 to defend African American George Crawford on murder charges, he sought the advice and possible testimony of Verdie Robinson because of his intelligence, success, and social status.

The shop remained segregated until 1962, after the death of Verdie Robinson. Two of his barbers, Raymond Hughes and Horace Nelson Lassiter, demanded of Robinsons widow that they end their policy of segregation. Annie Robinson sold the shop to the barbers, who immediately integrated. The shop still exists today, and the nearby alley was named for Lassiter after his retirement in 2018.

As of the writing of this blog, Horace Nelson Lassiter has passed away on Wednesday June 3, 2020. He will be fondly remembered as a prominent figure in the community.

Verdie Robinson’s activism and interaction with the NAACP was significant, although not unique to him. Many African American business owners used their success to build up their community and motivate real change. One of the most exemplary versions of this story is that of Marie Medley Howard. 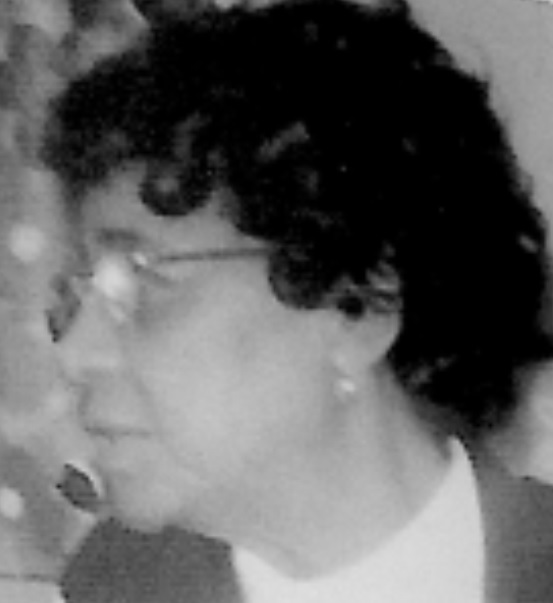 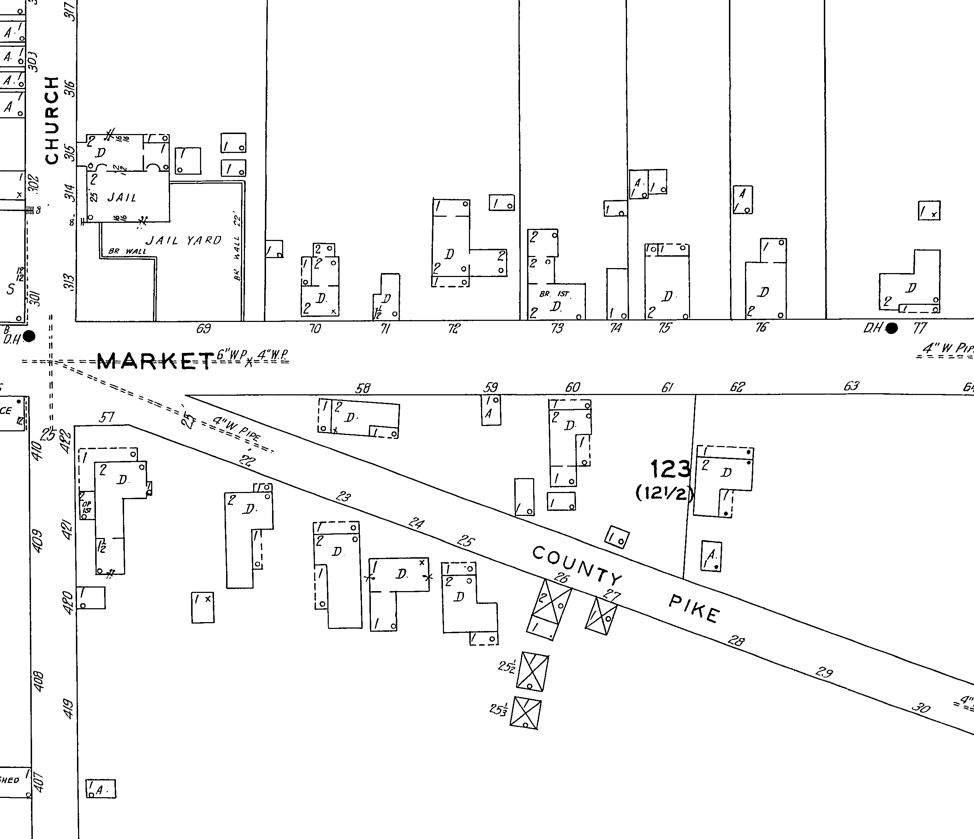 Marie Medley Howard was born in Leesburg in 1900, and was a lifelong activist and a strong advocate for education equality. Without an accredited black high school in Leesburg, Marie went to high school in Washington D.C. and eventually Madame C.J. Walker’s school of cosmetology. Madame C.J. Walker, a black woman, is credited as the first female self-made millionaire in the United States. Marie Medley Howard was also the granddaughter of Jesse L. Moton Sr., who himself was a business owner at Spiller and Moton and a trustee of the Bailey’s Institute, one of the first black schools in Leesburg. It seems clear that her background inspired her future activism as a woman, an African American, and an entrepreneur.

After school, Marie opened a beauty shop near her childhood home in Leesburg, just behind the modern Barrister Building. Marie was known for her poise, fashion sense, and tenacity. While she gave her beautician services to the women sitting in her chairs, she also gave them an education on equality and activism.

Much of Marie Medley-Howard’s activism was around the establishment of an accredited secondary school for African Americans in Loudoun County. The Leesburg Training School, the current school, was unaccredited, in poor condition, and did not provide transportation to its students. Marie and the County Wide League (a union of black parent-teacher organizations) fought the Loudoun County Board of Education for improved standards and facilities. When NAACP litigator Charles Houston returns to Leesburg to assist their efforts, he inspires the creation of a Loudoun Branch of the NAACP. Officially founded in 1940, Marie Medley-Howard became the first president. In 1941, their efforts and money raised allowed for the opening of the Douglass School.

The site of the Barrister Building is where Marie had her family home and her successful business. It is where she lay groundwork for the civil rights of her neighbors and where the NAACP Loudoun Branch would eventually, fittingly create their first office. Every year, the Loudoun Branch presents the Marie Medley Howard Award to a member who exemplifies her commitment to “human rights, education, and justice.”

In the year 2001, the Marie Medley-Howard award was presented to Gladys Burke, businesswoman and owner of ADJ Enterprises, whose office was coincidentally—or serendipitously—located in the Barrister Building.

This week I highlighted a few notable historic businesses and entrepreneurs within Leesburg- future blogs will feature other parts of the county. This is not a comprehensive list.